Ok, so this is going to be summary of the fast paced Term 6, simply because I don’t have much time to write a detailed post on each event. And that’s the whole point of this rant, time!

Term 6 started off pretty slowly with not much to do except all the events that we had this time. We had the Venture Capital Investment Competition, in association with the Kenan-Flagler Business School @ UNC. This was an internal round and the winner from ISB gets to participate in the Asia Round that we are organizing for the first time sometime in Feb. The winner of the Asia round then gets to goto UNC to participate in the finals with students from among the top B-Schools in the world. So this was kind of a trial run for us in preparation for organising the Asia round. I was handling all the logistics and I can tell you, it wasnt an easy job. It did go off without a hitch though, so no complaints. 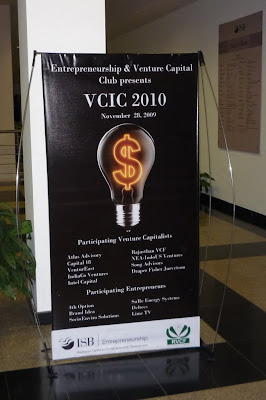 VCIC Internal Round
Parallel to the VCIC, we also had the Energy Conclave organised by the Energy and Manufacturing Club on the same weekend!

Next, we had the RBI Governor, Dr. D Subbarao on campus to talk about the impact of the recent crisis on India and our future growth. 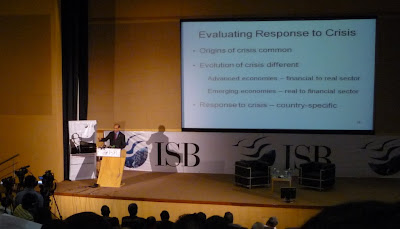 Then we had the ISB Leadership Summit, ISB’s flagship event with over 30 speakers coming over to speak on multiple panels, all on a single day. It was an interesting experience, with the sad part being the choices we needed to make on which discussion to attend. I settled for a very interesting panel discussion where Mr. B S Nagesh, the MD of Shopper’s Stop, spoke on his experience with Indian Retail and its growth over the years.

Then of course, we also had ISB Day celebrations as ISB turned 8, with a cultural program over the weekend as well, with some great performances by students, staff, families, you name it!

In between we also had the finals of iDiya, the social entrepreneurship competition, with teams of working professionals from all over India competing, and the top 6 teams attending mentoring workshops at ISB. One of the highlights of the competition was the session on Responsible Leadership by Rahul Bose, who besides being an actor, is involved in a lot of different things, from the Indian rugby team to his NGO.

In addition, pre-placement talks have started, with companies coming to campus almost everyday to deliver their pitches. There are some really interesting roles up for grabs, and resumes are being polished, and interviews being prepared for.

And last, but definitely NOT the least, we have Solstice 2009 this weekend. The biggest fun event of the year, when ISB alums from all over come back to school for 3 days of partying with the current batch.

WHEW! So much for being short, I am already out of breath.
Oh, and this is just a single term at ISB!

After a long long time, I finally had a weekend when I didn’t have any immediate assignments due. This of course does not mean I wasn’t busy. I was still running around the whole weekend from meeting to meeting for a couple of projects whose reports we have to submit. However, since those aren’t due for at least another 10 days, the weekend was relatively chill when compared to batchmates who had assignments due over the weekend.

The best part of the weekend was the Halloween party organised by the Student Life Council at the open air 08 Lounge. It was the largest party yet, with lots of alums turning up as well. People turned up in proper Halloween attire, with lots of thought having gone into the costumes. There was food, drinks as well a rocking DJ… 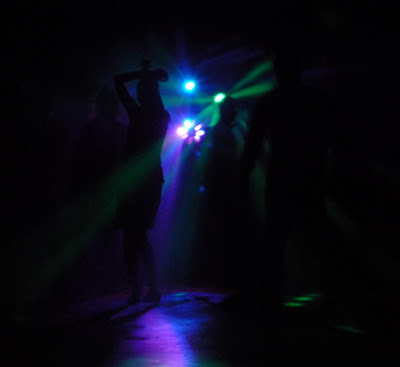 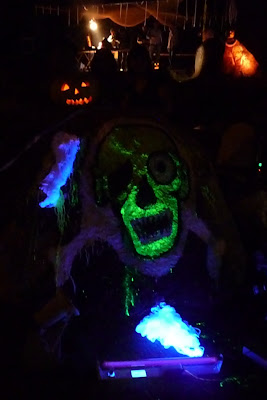 While the party literally went on till the break of dawn, we left at around 4:30 A.M., for a long drive on the smooth road to the Airport!! Its rare that you get time for such things in ISB, traveling with friends on a long road with nothing in particular to think about, just driving to nowhere for the heck of it.

I have had a couple of friends etc asking about how and what to write in the ISB application essays. While I do NOT claim to be an expert on the ISB admission essay, I have attended a fair share of info-sessions for prospective students held by the admissions team. Here are a few pointers followed by 2 excellent resources for more.

Resources:
1. The ISB Admission Director’s blog, here, for information and some takes/advice on the admissions process. Two good posts on Essay analysis and admissions are ‘Essays. How to go about it.‘ and ‘Application Evaluation Process by the ISB.‘
2. A blog run by a batchmate of mine, Nitin Pulyani, is pretty popular for both GMAT as well as ISB Essay analysis. Find the blog and this years essay analysis here.
3. For information about student life at ISB, Hyd, there are a lot of blogs around:
For admission queries, you can get in touch with the pretty responsive admissions team at the following email id: pgpadmissions a t isb d o t edu
Hope this post helps.
DISCLAIMER: The views expressed here at mine and mine alone. They in no way represent the views of my school.