National Geographic hosts their international photography contest every year showcasing images submitted by readers from all over the world. The photographs are then voted on by readers and the top ones are selected.

25 images from among this year’s entries are featured here: http://www.boston.com/bigpicture/2009/11/national_geographics_internati.html
Top Photos from previous years: http://ngm.nationalgeographic.com/photo-contest/past-winners?startgallery=1
Some great wallpapers from these photos: http://ngm.nationalgeographic.com/photo-contest/2009-wallpaper
Selected photo galleries: http://ngm.nationalgeographic.com/photo-contest/2009-galleries
If you are into photography, its a must view to get an idea on the different ways photographs can be taken at the most unlikely (and even the most beautiful) locations….
One of the courses in Term 6 is the Managing Teams course taught by Prof. Henry Moon from the London Business School. While the course started later than the other courses (schedule/visa issues) and we are only 2 classes in, the course is a whole lot of fun and has the capacity to make one really think!
Employee motivation was today’s topic and I really liked the way it went. One of the factors discussed really got me thinking and is the reason for this post. The Two Factor Theory or Herzberg’s motivation-hygiene theory essentially believes that factors that affect job satisfaction as well as factors that affect job dissatisfaction in the workplace are separate from each other. While this may not be directly obvious, what it believes is that factors like salary are the bare minimum you look for in your job. Having more of it does not really mean you have higher job satisfaction! Of course this will not hold true for everyone. Someone may of course be motivated solely by a monetary incentive, but you know what I am getting at.
While there has been some debate over the years on the exact validity of this theory (refer to Wiki links above), there is empirical evidence that shows the very same thing and is what got me interested in blogging about it.
Apologies for the black and white image, the ppt hasn’t been uploaded yet, and I didn’t want to wait. 🙂 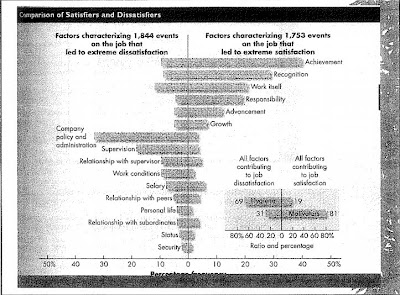 This really is food for thought. What does it mean? That people are most easily dissatisfied by different kinds of company bureaucracy, something that I am sure the majority of us knew already, but the way the whole thing was explained …. lets say we can see why he teaches at LBS!

In the 1 year program at ISB, the one thing that is at a premium is time. With different activities taking place every week, many of the clubs often come up with some great ideas to increase student interest and awareness in different topics.
A while back, the Real Estate and Infrastructure Club at ISB organized the ‘Infrastructure Summit 2009’. The theme of the event was “Realizing Indian Infrastructure 2015”. The event also included a panel discussion on ‘Public Private Partnerships: A Reality or a Distant Dream?’
Anyway, the point of this blog post is to showcase the great marketing done by the club members to promote the summit within the student community. They used a mix of emails as well as posters at various spots inside the college.
What I found extremely interesting was the design of the posters to show the possibilities and the growth potential of the Infrastructure Industry in India in the coming years which in folded into the theme of the summit.
Some of the extremely creative ads used are shown below: 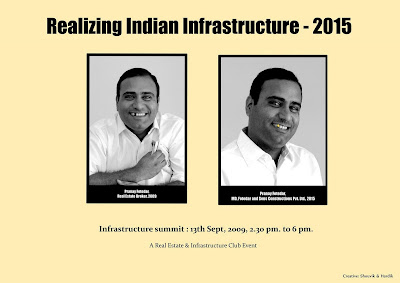 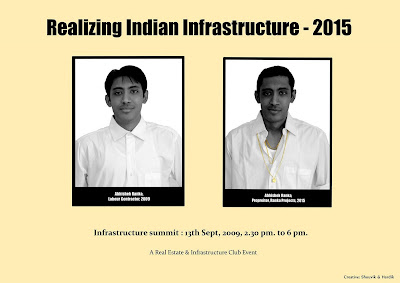 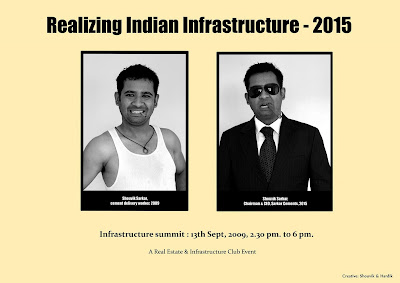 Click on each pic to expand and read the actual captions
Credit for the campaign: Hardik Jhaveri and Shouvik Sarkar.

Microsoft recently released a book that is actually a collection of 157 photographs taken by Microsoft Employees. The book is available for sale, with the money raised going to the charity, The United Way. The book contains a lot of very cool photographs.

For online viewing of the pictures, go here.

Well, before you know it, 4 terms are done and we are all halfway through the MBA program here at ISB. The core terms, or the first year of a normal 2 year MBA, are done and now its time for the 4 elective terms, where everyone picks subjects of their choice and specialises in one or more subjects. We had the mother of all term breaks this time, a whole 9 days long! However, true to form, it went by before you even realised it was there, and Term 5 begins tomorrow.

There were many things I wanted to blog about in these hols, but what with one thing and the other, it all got delayed, so I hope to get back to writing this term, and lets see how that goes 🙂

The term break as a whole was a great chance to unwind. I visited some places in Secundrabad for the first time as well as the Salarjung Museum which is a treat to visit. Besides the famous clock and the marble Rebecca, everything there is worth seeing at least once. The marble Rebecca is an amazing statue which leaves you wondering at the fine details etched into it. 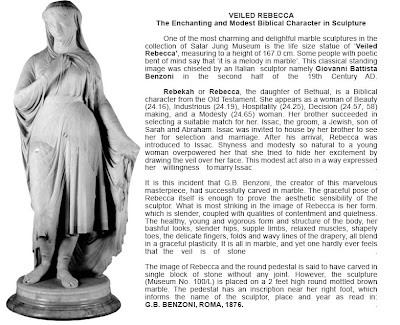 The whole scope of the place and the different kinds of stuff Salarjung III collected in his lifetime is just mind boggling, especially if you factor in the number of countries he got everything from as well as the weight of some of those items. Ming pottery from China as well as customised crystal from Czechoslovakia were only among some of the things you see over there. There were delicate Japanese and Chinese porcelain, suits of Armour, swords with diamonds embedded on them, silk embroidered paintings and what not! The amazing part is that only a fraction of the whole collection is actually on display, with space being the limiting factor here.

With the elective terms coming up, we also have the exchange students coming in. The last 2-3 days had orientation as well as a city tour for the new students who have arrived on campus for the next two terms.

We went out on campus, which doesnt sound like much till you realise that the ISB campus is 260 acres, with only part of it developed and in regular use. There is a check dam which is a great spot with a couple of birds the only creatures around to break the silence. The rest of the area has never been cleared and has lots of peacocks frequently seen along the road and even in the Student Villages.
We took a couple of pics as well.

Thats Microsoft in the background… 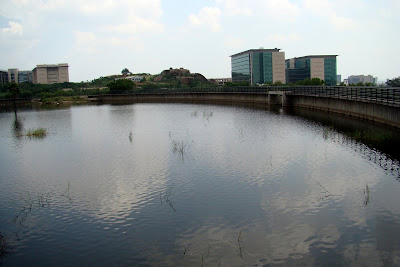 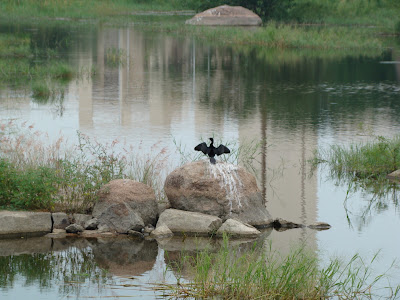 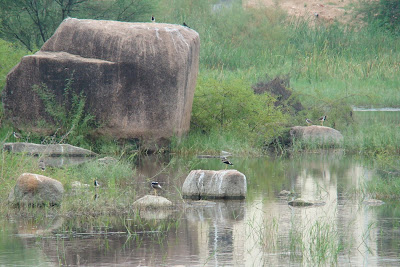 Some pics of the lawns and the main building: 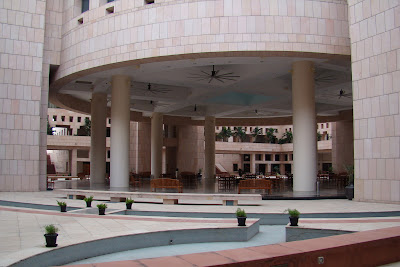 The Atrium – Deserted in the break 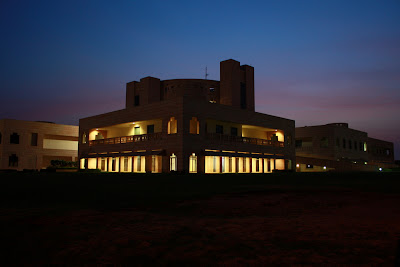 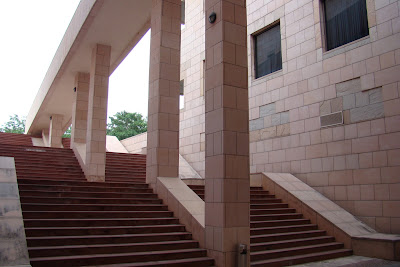 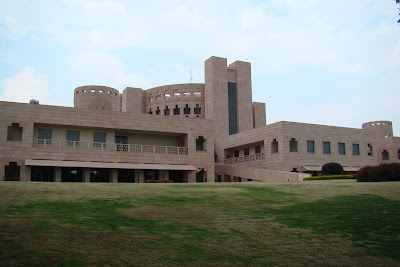 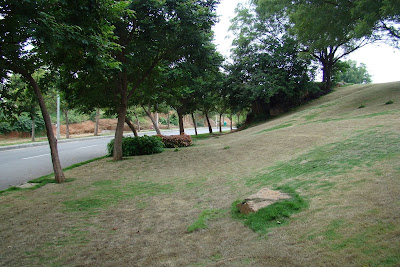 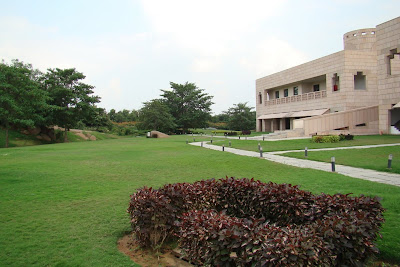 Although I didnt capture any good pics on the walk, here are some old pics taken on campus 🙂 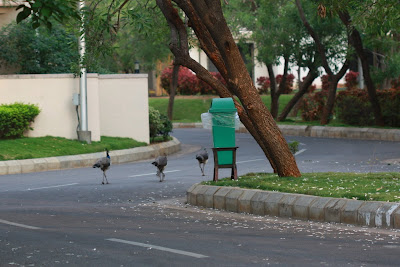 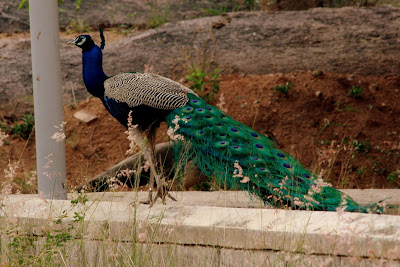 Here’s Another One (Pic – Saikat Poddar)